In previous posts I've setup build and release defintions for Dynamics CRM solutions and in this one I try my attempt at setting up an automated Continuous Delivery pipeline. There are two popular strategies used to make sure that every change made to a system can be deployed successfully to secondary environment:

Both methods appear to be doing the same thing, so when should I choose a CI build + release over a scheduled build? The most common metric appears to be the duration of your build and unit tests. The size of the team, the project and code complexity and the frequency of check-ins can have an impact on the time it takes for build and long running unit tests to execute. In these scenarios a Scheduled build makes more sense.

I was disappointed to find out that, at the time of writing this post, VSTS release definitions does not provide an option to trigger off a successful a scheduled build. The only options available are to trigger it off of a CI build or the automated schedule on the release itself.

Luckily, Rene van Osnabrugge's excellent post provides us with a workaround for this restriction. Here's an overview how it works:

Lets get started setting it up.

StyleCop is a configurable analysis library that ensures code produced conforms to it's coding standard. While the benefits of a consistent coding standard is clear, each team has there own strong opinions how it should be enforced.

In my previous projects I've used the StyleCop.MsBuild package and have been eager to try out the code analyzer version of the tool. In this post, I will start off with a quick run down of my attempt at integrating it into a solution.

That's it. That all we need to do to get started.

By default StyleCop treats suggestions as warnings, but I prefer to go strict mode and treat all style cop validations as errors. This means that build actually fails if the code does not adhere to the style validations. My justification is that its always cheaper to fix these issues early in the development cycle as well as minimizing "broken windows syndrome".

When using the older StyleCop.MSBuild package, I could just set the StyleCopTreatErrorsAsWarnings environmental variable in the development machine or the team build and it will ensure that the the scope is limited to the StyleCop errors only. Unfortunately, with the Analyzers project it does not seem to be that simple. There exists an TreatWarningsAsErrors environmental variable, but this is global and treats any warnings as errors - not what I want.

Resolving a Race Condition Within a Dynamics 365 Process

I was attempting to diagnose and issue for a client the other day. It revolves around a single workflow that is being executed on both the create and update event of a field. And within this workflow, a custom activity executed if the field matches a certain condition. The problem was that the custom activity was being executed twice when it was only expected to run once. 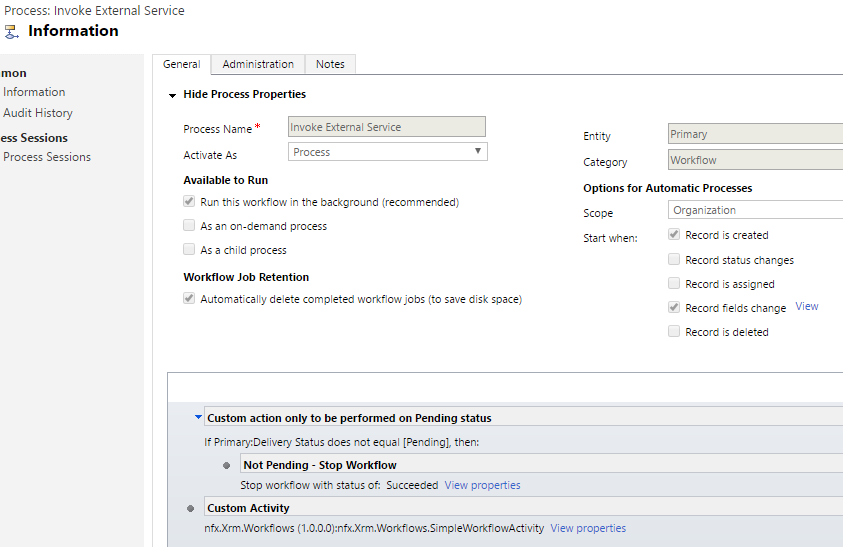 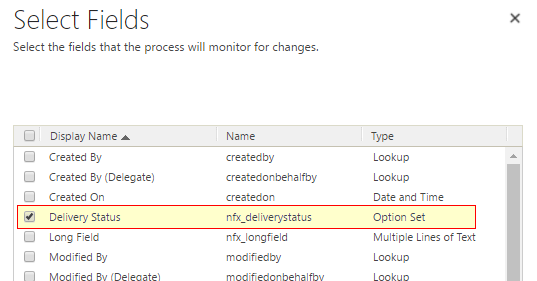 If we take the above example, it can be replicated easily:

Navigate to the background processes and ensure that the workflow was executed twice, once on the create and then again on the update. If you performed the update soon enough, you notice that both instances satisfied the citieria and the custom activity invoked.

A continuous integration build ensures that the code within a source control repository can be compiled successfully after a commit. It is defined as:

Continuous Integration (CI) is a development practice that requires developers to integrate code into a shared repository several times a day. Each check-in is then verified by an automated build, allowing teams to detect problems early.

Where as CI builds occur after a commit has been merged into the repository, a gated check-in is a "pessimistic" process that would treat a commit as completed only if the result of it being merged with the repository is a successful build.

In this post I will try my hand in setting up a gated check-in using Visual Studio Team Services (VSTS). I will start off with TFSVC as the underlying version control system and then replicate the same functionality using Git.

Prerequisite: A repository already exists in the remote server with project code checked-in. I will be using one of my demo CRM projects.

My colleagues and I ran into a interesting problem the other day; we noticed that on some records all the notes attached to it were being updated seemingly randomly being updated. At first glance I was confused as to why this was happening, but we eventually found the steps to reproduce it:

Now, if we observe the notes control it shows User B's name along side the date and time stamp.

I was initially thrown off as to why the above actions changed the Created By of the notes, but what I failed to realize was that the annotation control shows the Modified By user and not the Created By.

In past projects my release note strategy has been a combination of custom scripts (to pull the changesets between releases) and good old fashioned elbow grease to manually create the notes. I was curious to know ways about the ways to achieve the same in git and learning about the techniques used in popular open source projects.

In order to automatically generate a changelog the repository requires consistent commits - and I found that there are three steps that can be done to achieve this:

In this third and final installment I cover the steps involved in setting up the minimum release and deployment steps required for a successful Dynamics CRM/365 deployment. The steps and actions performed in the previous posts acts as prerequisites for this one.

In the previous post, I setup the team build to automatically publish packages into the Octopus Deploy package repository.

We can verify that they have indeed been published by navigating to the Library > Packages tab for a list of available packages.

Environments are a logical grouping of targets / machines used by deployments. For the purpose of this post, I will create one environment - Testing and it would contain a single CRM deployment target - the CRM Server).

This is the second part of a series of posts where I attempt to deploy a Dynamics 365/CRM solution using Visual Studio Team Services (VSTS) and Octopus Deploy (OD). Previously, I setup an OD server and integrated it with VSTS - the steps describe in that post act as a prerequisite for this one. In this post we go about modifying an existing Dynamics CRM build definition to automatically package the release-artifact and upload it to the OD server for deployment.

There are a few different ways of getting a package into Octopus Deploy:

And the method of publishing the package has no bearing on the end deployment -I chose to explicitly push to the remote octopus deploy server.

I have seen Octopus Deploy (OD) being mentioned frequently in the community but haven't had a chance to play around with it myself. Therefore, I think that attempting to deploy a Dynamics 365/CRM solution using Octopus Deploy seemed like the perfect exercise to learn more about the platform and its features.

I was curious if there were other developers who have released Dynamics CRM using Octopus Deploy and sure enough there was some one who had already thought of that.

In this series of posts I try to cover everything from setting up integration with Visual Studio Team Services(VSTS), updating a build definition to automatically publish itself and then finally setting up a simple release and deployment pipeline.

When I saw the integration tasks provided by the OD extensions for VSTS, my first reaction was to divide the tasks between the build and the release in VSTS. I wanted to the the build definition to build and package the solution and pass it on to release management. Release management would then publishing the release-artifact to OD and explicitly remote trigger the OD deployment.

While it was certainly possible to set this up, its did not make sense to have two deployment services for the same pipeline. Therefore the strategy is going to be very similar to the one that I had done previously - VSTS would continue to act as the version control and build server but this time Octopus deploy would act as the release component.

The build server would handle creating compatible package and uploading it to the OD package repository. And OD takes over the management of the environment, release and deployment complexities.

Version 1.4.0 of the generator released. It includes the following changes: